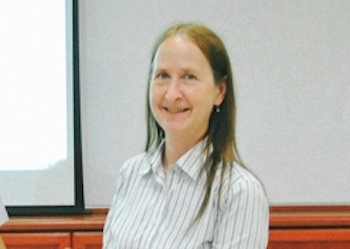 Sara A. Majetich is Professor of Physics, Electrical & Computer Engineering (Courtesy) and Materials Science & Engineering (Courtesy) at the Carnegie Mellon University (Pittsburgh, USA). She obtained her PhD in the University of Georgia. Majetich is recognized worldwide for her contributions to the understanding of magnetic nanoparticles. She studies the fundamental physics of magnetic nanoparticles that have very uniform sizes and applies her work to the design of functional materials that have applications in data storage media, high-speed electronics and biomedicine. Thanks to her work, she has been awarded with a lot of distinctions and honours, which include the National Young Investigator Award by the National Science Foundation (1992), the Eminent Scientist of the Year Award by the International Research Promotion Council (1999) or the Carnegie Award for Emerging Female Scientist (2010). Moreover, she was IEEE Magnetics Society Distinguished Lecturer in 2007.

Know a bit about her research...

My research focuses on the fundamental of magnetic nanoparticles that have very uniform sizes, as well as possible applications in information storage and processing, and biomedicine.
Monodisperse nanoparticles are synthesized by chemical methods and used as building blocks for self-assembly into arrays. The collective magnetic behavior of the arrays has been studied using electron holography and Lorentz microscope to image domains, and using polarized small angle neutron scattering to investigate the magnetization length scales within nanoparticles and their assemblies. Magnetic nanoparticles and nanopillars are also made by electron beam
lithography and etching. We have demonstrated the ability of conductive atomic force microscopy to detect the state of a magnetic tunnel junction nanopillar, and switch it using a spin-polarized current.

Know a bit about her talk...

Magnetoresistance as a Probe of Switching, Superparamagnetism and Exchange Bias in Individual Nanoparticles

Spintronics has transformed the field of magnetics, yet there have still been very few studies of magnetoresistance in nanoparticles. Early work in this area demonstrated the feasibility, but also the challenges of attaching single nanoparticles to electrodes and obtaining crystallographic orientation [1]. Because of their coatings, magnetic nanoparticles naturally form tunnel junctions, and in the proximity of a magnetic reference electrode they will show magnetoresistance. Here we describe three examples of how magnetoresistance measurements on single nanoparticles reveal new insights about superparamagnetism, exchange bias, and spin orbit torque switching.
Superparamagnetism in nanomagnets is usually studied in ensembles of nanoparticles that are presumed to be identical and non-interacting. Models of the time-dependent magnetic relaxation are interpreted in terms of an energy barrier for thermally-induced reversal. Measurements on single particles provide a richer and more nuanced view of superparamagnetism. Here the time-dependent magnetoresistance fluctuations of circular (20-80 nm) and ellipsoidal (20 x 60 nm) CoFeB nanodots are measured [2]. These particles are magnetically stable at zero field and low bias, but can be driven into a superparamagnetic state for a range of magnetic fields or current densities. The different effects of magnetic field and spin transfer torque on the effective energy barrier are analyzed. When CoFeB nanodots are oxidized to form a core-shell structure, the switching and superparamagnetic dynamics change dramatically. With an ensemble of core-shell nanoparticles, cooling in a large magnetic field leads to a shift in the hysteresis loop, and the effect is interpreted in terms of exchange bias. It is possible to observe training effects in single core-shell nanoparticles at room temperature, with only modest applied fields (±500 Oe). With CoFeB particles, the surface oxide is cobalt ferrite-like, and has higher anisotropy. The superparamagnetic fluctuation rate is slower for small particles for a constant oxide thickness. Because the oxide shell is polycrystalline, oxidation can rotate the easy axis and cause reversal to occur through multiple step-wise rotations. The implications for superparamagnetism and exchange bias effects in chemically synthesized nanoparticles are discussed.
A charge current passing through a heavy metal beneath a magnetic nanoparticle generates a spin orbit torque that can switch its orientation. Magnetic random access memory (MRAM) devices based on this switching mechanism would ideally be sub-100 nm and would have a high thermal stability factor (60-80).
However, measurements of spin orbit torque switching have focused on larger structures with lower thermal stability. Here we show how conductive atomic force microscopy (CAFM) can detect reversal of a 20 nm nanomagnet with a thermal stability factor of 85. From our results, the charge current density needed for spin orbit torque switching is estimated to by only 15% of that needed for spin transfer torque reversal, and has an estimated write energy of 0.1 femtojoule. This approach is promising for low power MRAM.

Scroll back to top